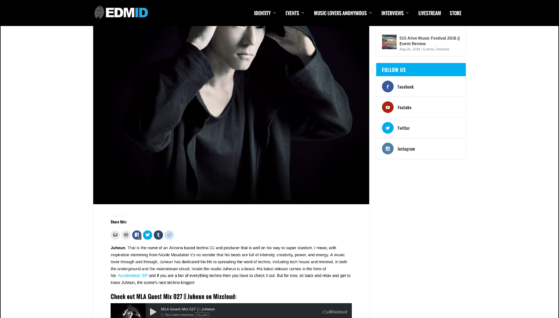 If you are a techno fan than you are certainly always on the lookout for great new techno tracks and artists. Well, I have a hell of an artist to share with you all today! Juheun is a name that has been causing a stir in the underground techno community for some time. If you are a true techno fan than you may have heard of him before. He is a native of the southwest United States and since 2009 he has been grinding hard to make a name for himself, mostly around the Arizona area. But his ear for good music, his understanding of all the ingredients needed to make relevant techno beats, and his knack to create sounds that techno lovers flock to have allowed his popularity to grow among the masses. And now, as the United States techno scene is healthier than ever, Juheun is taking his career to the next level. I am pleased to announce that Juheun’s ‘Acceleration’ EP has arrived on Octopus Recordings and I can honestly say that is a seriously impressive collection of work.